I glanced at the battery usage details. There I noticed that Jami consumes a lot of battery.

I definitely think there is room for improvement.

Without proxy, device must continuously sync the network, so battery will be more impacted, that’s why a proxy can be used on mobile and is enabled by default.

So, do you use DHT Proxy, without really having any messages delay?

Once the p2p socket is created, messages are sent through this socket. The DHT is used only to create the socket, so with or without the proxy delay should not change.
If both sides are connected and the message takes more than a few secs to get through, it’s not a normal thing

A buddy was also complaining the mass battery usage of about 45% on his iPhone 10, I can confirm when I was using my iPhone 5s. I have moved to an Android phone running Android 7 which is using an average of < 5% battery use. Maybe its an iPhone thing that can be looked into?

I have never been one for changing settings on apps unless its a workaround until an updated version is released.

Has there been any development as I’m losing support in the iOS camp?

Hi is the remaining iOS users battery usage. As you can see it is unsustainable and impractical for daily use. 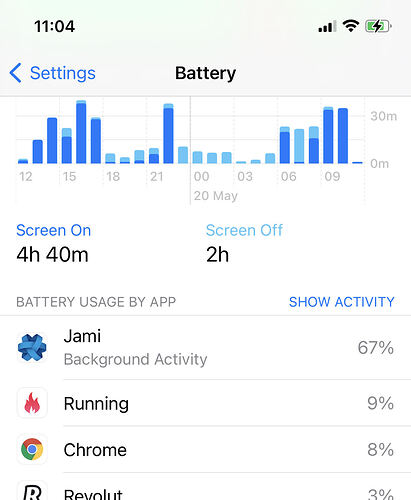